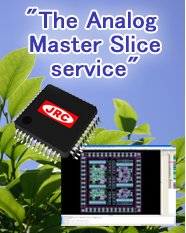 NJR is responsible for all sales and product support to customers located in the US, Canada, Mexico and Latin America.

New Japan Radio Company ("NJRC") was established in 1959 as a joint venture between Japan Radio Company ("JRC", Tokyo, Japan) and the Raytheon Company (Boston, MA, USA). JRC was established in 1915 and is known throughout the world as a pioneer in Radio and Wireless technology. NJRC has been providing semiconductor products and microwave components for over 40 years to Industrial and Consumer markets.