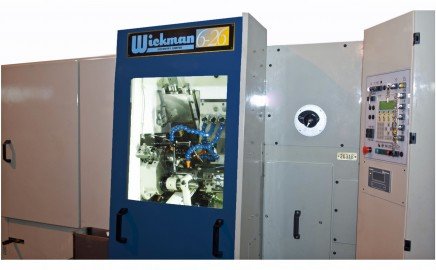 Wickman was founded by Mr. Axel C. Wickman in 1926. He initially sold German-, Swiss- and British-made machine tools, and had many ideas which he knew would improve the machines he was selling. Within 10 years, he had designed and produced the Wickman multi spindle automatic lathe (originally a 5-spindle machine). Without the Mr. Wickman vision, there would be no Wickman multi spindle; for that we thank him for his vision and dedication in producing one of the finest multi spindle automatic lathe that is, to this day, still being used within the four corners of the globe.

In 1948, the Wickman company was purchased by the John Brown Group, by which time Mr. Wickman had emigrated to the USA. John Brown were world-renowned ship builders, largely dependent on their machine tool group for survival; Wickman was the jewel in the crown of the machine tool group. Sadly, there was little investment in new plant at Banner Lane plant so when the worldwide decline in the demand of machine tools set in, John Brown were reluctant to keep Wickman, selling it in 1984 to Ketlon Limited who renamed the business Wickman Bennett.

Several changes of ownership took place over the last 12 years until the company had the fortunes of being purchased in 1996 by Mr. Andrea Tajariol.

For the first time in over 40 years, Wickman was in the hands of an engineer and not accountants. Mr. Tajariol had already established a reputation as an outstanding production engineer and an expert on multi spindle machines. He was already manufacturing the Mori-Say (Euroturn) machine at his production facility in the Czech Republic, and he set about introducing improvements to the Wickman range such as the Curvic Coupling, which the Mori-Says already had.

At first, it might appear that Mr. Tajariol was selling two ranges of multi spindle auto, which were in direct competition with each other, but he does not see it that way. In his own words, “I tell my customers that if they have a component that changes every week, then buy the Wickman because it’s easier. If they have a complicated component and they leave it on the machine for a long time, then buy the Mori-Say. It varies with the customer so I tell them that if they already have Wickmans, continue with them as they can use the same collets, attachments and toolholders.”

Mr. Tajariol certainly brought stability to the Wickman company and sales have steadily increased since he acquired the company. This increase is directly attributable to the efforts of the two young men who he introduced to the company in 2000 to run the Wickman operation: Owen Coyne and Chris Barrett. Both Owen and Chris lead by example, and they know that personal contact with Wickman users is essential to establish the trust, necessary for good business relations.

Whilst maintaining excellent relations with customers in the declining UK market, Owen and Chris have taken every opportunity to explore new markets with considerable success and an impressive chain of overseas offices and representatives has been established. No longer are there Wickman users who thought that Wickman had gone out of business, as was the case when Owen and Chris arrived at the company.

The Wickman team of service engineers is currently larger than it has been for many years, a sure sign of improved liaison with Wickman users, and spares sales continue to rise.